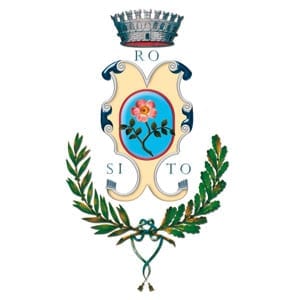 The ancient name Rosito was attributed to the abundance of wild roses of this territory. The addition of the word Valfortore refers to the Fortore river, which springs from the east side of the borgo running through the valley.

Set on a steep slope of the Fortore valley, the borgo of Roseto is sufficiently well preserved, a small treasure chest full of memories of the local stonecutter’s art. The town planning is of medieval origin, you can walk along the lanes in peace, shrouded in the scents and sights of the nearby green Vetruscelli forest. It could not be otherwise in a borgo that takes its name from the dogrose and which has this flower on its coat of arms and, moreover, where these roses grow along the main road. The alleys, called stréttole, of the old town of Roseto all start from Piazza Vecchia. They develop in accordance with a Longobard building technique: a larger one over which the staircases of the houses alternate and a closer one that acts as a rainwater collector. At the end of each alley there was a door which was closed at sunset, to protect the borgo. Adjacent to Piazza Vecchia you will find the imposing Chiesa Madre (Mother Church), built by the feudal lord Bartolomeo Di Capua III in 1507; a must is the balustrade carved in local stone by the artists of Roseto and the two carved noble sarcophaguses, traditionally associated with the names of Tuleje and Mmaleje, made from the same stone. Facing the left side of the Chiesa Madre you can see the Palazzo Marchesale, also commissioned by Bartolomeo III. In front of the main staircase of the Church is the Arco della Terra which is the main entrance to the borgo. In a corner of the outer wall above the arch is a stone head, which may represent one of the feudal lords of Roseto, on which a flag was hoisted on the days when the feudal lord held court. In 1623 the archpriest De Santis led the cult of S. Filippo Neri to Roseto, he then became Patron Saint of the borgo. Inside his home, which became an oratory, a precious silver bust of the saint is still preserved. At the centre Roseto is the Church of SS. Corpo di Cristo (Body of Christ), which was an important place of worship during the eighteenth and nineteenth century, when it was restored and renamed Christ the King, it is now deconsecrated. The work of the stonecutters of Roseto is the most important artistic heritage of this borgo. Portals, columns, basreliefs were made by masters who have worked stone from the local quarry, located south of the borgo, for centuries.

Roseto is known as the “city of honey and truffles” thanks to the large amount of flowers and black truffles that its forest offers.

Do not miss to taste the local very good and sweet bread.