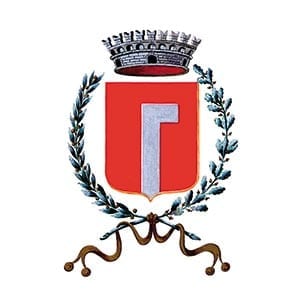 The name is connected with the patron saint, Lucio Ginesio, a Roman martyr, who was an actor, musician, and mime. He lived under the emperor Diocletian (284-305), who had him decapitated even though he was very dear to him, because after having long mocked the Christians in his performances, he suddenly converted to the new faith. His remains are kept in the Collegiate Church.

Rising in the main square is the jewel of San Ginesio, the Collegiate Church. Its façade is divided into two parts, the lower part being the older and including the magnificent travertine portal (11th cent.), with concentric round arches that continue the same architectural rhythm of the narrow columns and pilasters. Set in a tile in the right corner of the portal is a crude figure, possibly of Lombard workmanship, of the actor saint. Peeping out among the capitals of the portal columns are the head of St. Ginesio on the right, and the hand of the Eternal holding the Sphaera Mundi, the globe of the earth, on the left. The upper part of the façade is an embroidery of terracotta: divided into five areas equal in width but of different heights, it was built by a German master in 1421, during the last blossoming of the Gothic inserted in the Romanesque tradition. Next to the façade is the Romanesque civic tower with an onion shaped pinnacle reconstructed in the 17th century. Gathered in the silence of the majestic church’s interior are examples of art from every period and style. The wooden Crucifix is the one brought by the 300 exiles in 1450 during their return to San Ginesio. From the Perugino school comes a Madonna and Child with Patron Saint, while the chapels on the right hold works by Federico Zuccari, Pomarancio, Simone de Magistris and other accomplished artists. The crypt is decorated with frescoes painted by Lorenzo Salim beni in 1406. From roughly the same period as the Collegiate Church is another splendid Romanesque-Gothic church, built in 1050 and dedicated to San Francesco: the harmonious portal and the apse are the oldest parts, while the neoclassical interior holds excellent works including an intense Crucifixion by the Rimini-Marchigiana school. Just a few steps away is another very old church (996), that of San Michele, with a beautiful Gothic portal and, inside, a shrine frescoed by Stefano Folchetti, a local painter influenced by Crivelli. Also from the Gothic period are the castle walls and the remaining porticos from the Ospedale dei Pellegrini (13th cent.), thus named because it gave hospitality and aid to the pilgrims passing through San Ginesio on their way to Loreto or to Rome, almost always on foot. Restored in 1456 57, when the loggia was also added, the building has preserved its Romanesque façade. Also worth visiting are: the four surviving city gates, various historic buildings, and the churches of San Gregorio, Santa Maria in Vepretis, and Saints Tommaso e Barnaba. But it is the atmosphere of the village, surrounded by panoramas filled with light, that is most enchanting. It is called the “balcony of the Sibillini mountains” for its scenic views, the green all around, and the treasures within.

Corn meal is used to make polentone (corn meal porridge), which is eaten with a meat sauce (pork, veal or chicken) or in bianco (with olive oil and sausage, pork chops or mushrooms) with grated pecorino cheese sprinkled on top.

The recipe for the delicious vincisgrassi is connected with the name of Windischgratz, an Austrian prince for whom this dish was prepared for the first time. The secret to make vincisgrassi – by many erroneously linked to Emilian lasagna – is the choice of meats used for preparing the ragù, which is mixed with a béchamel and spread over the layers of pasta.

What is “BORGO”. The literal translation of Borgo in English would be “Village”. But the term Village does not fully explain what a “Borgo” is. A “Borgo” is a fascinating small Italian town, generally fortified and dating back to the period from the Middle Ages to the Renaissance.
Category: Marche18 December 2017