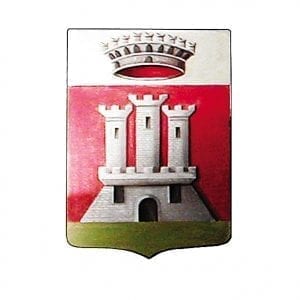 The borgo’s ancient name was Castrum Valli, which could mean either “castle of the valley” or “castle of the rampart” (vallo), i.e. a fortified place (vallum). The reference to the river Nera was added after the Unification of Italy.

Vallo di Nera is a monumental Borgo. It barely emerges from the woods with its light stone houses, extraordinarily preserved since 1217, when the town of Spoleto granted the men of Vallo to build a castle to defend the valley, on the hill where previously stood a fortress. It is, therefore, a medieval fortress with an elliptical urban plan, erected on a hill on the left side of the Nera river. The mighty walls and ancient towers surround the stone houses that lean against each other, interrupted only by steep alleyways, arches and underpasses. Two symmetrical gates, Portella and Portaranne, allow access to the Borgo, a pedestrian area. Once inside, the Borgo appears more medieval than ever: embrasures, corbels, narrow passageways, dark and serried alleyways, the priceless Romanesque churches and the stone portals, the tower house of the proud Petrone, who led the revolt of the castles in the valley against Spoleto. Three Romanesque churches represent Vallo di Nera’s artistic treasures. The church of San Giovanni Battista dominates the borgo on the highest part of the hill. Originally Romanesque (13th century), it was enlarged and partially rebuilt around 1575 (the date is engraved in the left corner of the façade). The façade with its bell tower can be dated to this period, as can the portal and rose window. Inside, the fresco in the conch is a splendid work dating to 1536 by Jacopo Siculo, dedicated to the Death of the Madonna. On the front of the arch the master painted a delicate Annunciation and life size figures of Saints Sebastian and Rocco. The Franciscan church of Saint Mary was begun in 1273 and presents a lovely Gothic portal and a turreted bell tower. The interior is surprising for the quantity of frescoes which still embellish it, work of artists of the Giotto school. Among these the Procession of the Bianchi stands out, painted by Cola di Pietro in 1401 (the fresco is one of the most complete sources for the Bianchi penitentiary movement which spread through Italy in 1399), as well as the Martyrdom of Saint Lucy by a 15th century artist from Camerino. Here bell ringers still ring the bells inside the mighty square tower by hand, in scales of chords which have remained unchanged throughout the centuries. The third church is that dedicated to Saint Catherine, erected in 1354, now home to a small auditorium. Outside the city walls lie the 15th century hamlet of Santa Maria with its Franciscan church and the hamlet of Casali, of 16th century origin, with its small church of San Rocco, the shrine of the “Immagine delle Forche, the hermitage of Sant’Antonio and the old artisan workshops, springs, country shrines and dovecote towers. Also of interest is the church of Santa Maria dell’Eremita, an ancient Benedictine abbey erected over hermit cells in the small village of Piedipaterno. Finally, the parish church of Paterno is worth a visit, as is the church of San Michele Arcangelo in Meggiano.

The Valnerina generously offers flavors and fragrances, from the precious black truffle – the undisputed sovereign here – to the  pecorino cheese, salami and cold pork meats, spelt, lentils and river trout. A place so rich in tradition does not lack handicraft production, including baskets woven by hand, lace, works in wrought iron and furniture. Some local farmers will sell you extravirgin olive oil produced on the rocky and sundrenched slopes.

As for food, there are a variety of choices. They go from strengozzi with truffle to spelt pie with saffron and mushrooms, truffled local lamb and barbecued river trout. The gnocchi with mutton are excellent (to be savored in the summer at the festivals organized in the piazzas under the starlit sky), as is the grilled pecorino. Exquisite sweets include those made with ricotta and the Christmas ‘ttorta made with wrapping baked apples, chopped nuts, chocolate, cinnamon and nutmeg in flaky pastry.

What is “BORGO”. The literal translation of Borgo in English would be “Village”. But the term Village does not fully explains what a “Borgo” is. A “Borgo” is a fascinating small Italian town, generally fortified and dating back to the period from the Middle Ages to the Renaissance.
Category: Umbria4 January 2018