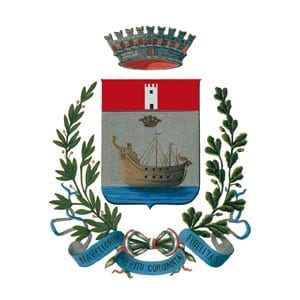 The origin of this place name is unknown. It probably derives from the word nava, “hollow”, “subsidence”, deriving from the dip in the land where the first settlement rose. According to popular tradition, instead, the name derives from Novelli, deriving from the union of nine villas into one castle, which then became Navelli after the participation of the inhabitants during the Crusades in the Holy Land, as can be seen in the borgo’s coat of arms.

The Borgo of Navelli suddenly appears, lying on a hill, with its thousand windows looking down, watching quietly over the valley. Navelli was a village of shepherds and farmers that became rich through saffron trading. The hi­story of Navelli is told through the stones and decorations that give it its refined look, its architecture is made up of arches that rose on the narrow streets and that linked the houses one to the other; these additional spaces overlooking the street were very important when families were large. Navelli is also represented by other traces of the past such as old writings on the wall referring to past events, the blackened wall suggesting the presence of the communal bakery house, and the blacksmiths or the wi­nery where grape must was cooked. The cobblestone streets, the shops, the furnaces that are no longer in use, the jambs and the architraves, are all elements that put together, make up a special work of art that was built stone by stone, over time, by silent and anonymous hands. Your visit may start from the top of the Borgo, where the seventeenth century Palazzo Santucci stands. This palace was built on the ruins of a medieval fortress. You’ll enter the baro­nial palace through a hall that leads to the yard with a well on which the date 1632 is engraved, the date when this building was finished. Two stone staircases will take you to an open gallery above, with its round arches, where the palace rooms re­tain traces of the ancient living area made up of monumental fireplaces and functional stone furnishings. From the backyard of the palace you can get to the Church of San Sebastiano which was built on the ruins of the old Church of San Pelino. Its bell tower was original­ly the turret of the medieval castle. The building was restored in Baroque style after the ear­thquake of 1703. The side entrance opens onto a patio and is embelli­shed by a finely carved wooden gate. On the left of the courtyard you will find Porta Castello, where the oldest part of the village begins. Beyond the gate, with the mountains of the Maiella in the background, you’ll get to Via del Macello, a long series of steps in steep descent, onto which a dense network of alleys open. On the east side of the main road is Palazzo Onofri, which was built in 1498 along with Porta Villotta. On the west side you can see Pa­lazzo Cappa with the chapel of San Pasquale. A little further on is Porta Santa Maria, this gate was built in 1475, and, if you’ll carry on in a southeasterly direction, you will arrive at Porta San Pelino.These three gates were built after the earthquake in 1456, when the villa­ge expanded its walls, only Porta Castello remains of the ancient en­trance. The old centre of the village encloses corners of peasant history, such as the three carved stone circu­lar basins, called pilucce, which were used as mangers for don­keys coming back from the fields. Walking on you will come across places of community life, such as the old communal bakery houses. Beautiful cobbled streets like Via San Pasquale on which several noble houses stand, has particular archi­tectural details such as steps cut into solid rock or the stone carved hands that seem to indicate the way. Outside the walls, but not far from the baronial palace, is the small Church of Suffrage. The frame above the window of the façade, with its symbols of the Confraternita della Buona Morte, shinbones and skull, reveals that originally this was probably a ce­metery church for noble families. Also outside the walls is Palaz­zo Piccioli, which faces onto the square of the same name, Palazzo Mancini-Marchi-Piccioli with the Chapel of San Gennaro and Pa­lazzo De Roccis, with its beautiful mosaic floors . Moving on from this palace, which stands just outside Porta San Pelino, and descending a long staircase, you reach the Chur­ch of the Rosary (XVIII century), which houses a painting of the Cru­cifixion, with its elegant shapes and volumes, by the Venetian painter Vincenzo Damini, and the organ by Hadrian Fe dra (1782) which is kept in a wooden monumental complex of astonishing dramatic impact, and which is richly decorated with gold reliefs. Outside the town you can visit the Church of Santa Maria in Cerulis (XI century), this is the ol­dest church in Navelli, and two rural churches, standing at the crossing place of two sheep tracks, which are the isolated Church of Santa Maria delle Grazie, which was built in Re­naissance style with Gothic elemen­ts in the rosette, and the Church of Madonna del Campo. The hamlet of Civitaretenga, is also full of sur­prises, just outside of the centre, is the monastery of St. Anthony, with its thirteenth century cloister and the Renaissance church, comple­ted in 1489, with a beautiful portal. Beyond the medieval square tower and the frescoes in the Church of Sant’Egidio, the Borgo hides a small ghetto which is a real gem, it was home to a Jewish community from the thirteenth century to the be­ginning of 1510, and that was built around the abandoned synagogue. It is a small place – the locals call it ju buch – made up of tumbling rocks full of memories, a place of salvation.

Saffron produced in the city of L’Aquila received the D.O.P. mark in 2005. It is also known as “red gold” and it grows healthy and pure around Navelli. Even if saffron is the most valuable product of Navelli, it is not the only one that characterizes this Borgo. Worth of note is its olive-oil, which is one of the few extra virgin oils of the area, together with the almonds and the small and tasty chickpeas.