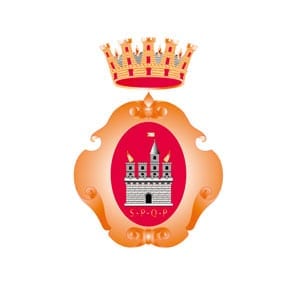 Pinna means “hill”, “top”, to indicate the four hills – shown on the municipal coat represented by four towers – on which the city was built. Fin Vestinorum was the name assigned to the place by Roman conquerors.

You can start your visit to the historical center, located in a panoramic position on two hills, from Porta Santa Croce, from the church of Santa Croce nearby and the picturesque small square that bears the same name. On the right, the church of Santa Chiara, built in the seventeenth century and renovated in 1702, overlooking the homonymous square. Going along Corso dei Vestini you’ll see the eighteenth century church of San Ciro, restored in 1843, and two remarkable buildings: the sixteenth century palazzo Scorpio, on the left, already home to Margarita of Austria, duchess of Penne, with renaissance courtyard brick; on the right, the palazzo De Dura, with a Renaissance brick façade. You’ll soon arrive to the collegiate church of San Giovanni Evangelista, documented since 1324, with the Renaissance bell tower of Lombard style and two portals. Continuing along the street, palazzo Stefanucci rises on a small street on the left, with its Seventeenth Century façade and portal; overlooking the street is another beautiful renaissance building, seat in the Fifteenth Century of the magistrate of Abruzzo, with an impressive terracotta façade. At the end of Corso dei Vestini, before arriving in the Piazzetta XX Settembre, built in 1841, you can admire the stone portal of the chapel of the family Aliprandi (1648) dedicated to Sant’Antonio da Padova, and especially the monumental palace Aliprandi, seventeenth century. Its stone portal dated 1773 overlooks the street of the Martyrs Pennesi, which ends with the door of the Ringa, the ancient port of the Arengo restored in 1832 by Baron Diego Aliprandi. Let’s go back to the piazzetta XX September to see the renaissance brick arches decorated with mold. We are now in the vicinity of piazza Luca da Penne, where the church of San Domenico stands, rich in works of art, the palazzo Leopardi, remodeled in the Baroque age, and the Palazzo Gaudiosi, already post-baroque. The church of the Annunziata, whose Romanesque origins are visible in the outer part of the apse. It has a bell tower, brick façade and a Baroque interior, and perhaps the most beautiful sacred building of the Eighteenth Century in the Abruzzo region. Continuing on in the direction of the Cathedral, you’ll find the late sixteenth century palazzo Ferdinando Castiglione, enlarged in 1699 and with seventeenth century stone portal, and two other Baroque palaces: Tirone-Pansa and Bono, the latter with redbrick exterior and portal with double columns. You’ll finally reach the Cathedral, whose existence is known already in 868, when the relics of Saint Maximum were transferred here. The brick façade was rebuilt after the war; only the crypt, the portal, the rose window (XIII century) and the fourteenth century bell tower are in Romanesque-gothic style. The interior preserves ancient terracotta pilasters of the XV century and the splendid altar of Bishop Odorisio (XII century). But, most important, it is the Romanesque crypt (IX century), which can be visited in the path of the attached diocesan museum of sacred art, to overwhelm the visitor with its five small naves covered with cross vaults. Last but not least, the church of Sant’Agostino documented since 1348, with the single lancet windows on the sides are original, the Fifteenth Century bell tower and the interior rebuilt in 1747.

The productive vocation of the territory is focused on cereals (spelt, corn, barley and the renowned durum wheat pasta), on the cultivation of olive oil (extra virgin olive oil Dop Aprutino Pescarese) and wines (the Doc Montepulciano d’Abruzzo subarea Vestina, Cerasuolo and Trebbiano d’Abruzzo) and on the  presence of zootechnical farms (white veal of the Apennines and Igp label). Among the first courses, we recommend the timballo in the oven and the maccheroni alla chitarra (a special type of hand-made pasta). Among second courses, do not miss to taste the famous arrosticini (grilled skewers of sheep meat) and kid in the oven.