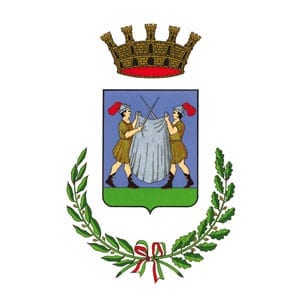 The toponym means “cut in the rock” – from the Latin talus (cutting) and cotium (rock) – and refers to the slit that divides the mountain and in which the Borgo has developed.

Tagliacozzo rises not far from the border between Abruzzo and Lazio, on the northern slopes of the Simbruini Mountains. Its walls date back to 1410 and used to have five gates. Entering the Borgo from a Roman arch, you’ll arrive to Piazza Obelisco, formerly called Piazza da’ Piedi, one of the most harmonious squares in Abruzzo region. It is surrounded by elegant buildings. Here you can notice pretty mullioned windows, a loggia with round arches and Renaissance windows. In the past it was surrounded by arcades, closed in 1810 by order of Gioacchino Murat, king of Naples, and in the centre it had the pilozzo, a stone seat for insolvent debtors exposed to the public pillory, replaced around 1825 by the fountain with obelisk. The theater Talia, a former Benedictine convent used as theatre in 1686, after alternating vicissitudes was renovated in 2002. It has a sober and elegant façade and three orders of stages in the inside, where more than 200 people can be seated. The Ducal building, the pearl of the artistic patrimony of Tagliacozzo, goes back to the first half of the 14th century; a second building phase is connected to the second half of the following century under the commander Earl Roberto Orsini, painted with his wife in the frescos with the writing RUBERTUS COMES ET CAPITANEUS on the frieze of the door. Other changes were brought when the building passed from the Orsinis to the Colonnas: we still have the symbols of both families. Many elements testify the beauty of this building, such as: decorated windows, the double lancet windows, ornamental rooms, paintings, staircases and particularly the Cappellina, where splendid frescos of late Gothic taste showing the life of Christ are still visible: the Nativity has similarities with the one by Benozzo Gozzoli housed in Rome in the Pinacoteca Vaticana (same subject, same abstract elegance). It was restructured at the beginning of 1600 together with the cloister, with stories of St. Francis life. It became Baroque in the 18th century and was closed from the Napoleonic edicts in 1809 and turned to town services. Restored in 1960, it has taken back its vocation of Franciscan centre. The façade and the ancient portal are very beautiful, as well as the Gothic rose window. Inside is roomy and austere, and there are many bronzy and wooden works. The Romanesque Church of Saints Cosma and Damiano is the most ancient and rich in heritage, in despite of the thefts and the dispossessions of which it has been object during the times. It goes back to the 8th century, it belonged to the Benedictines of Montecassino and it was the reason of a long dispute between the Papal state and the bishop of the Marsis. It is remarkable for its façade with the portal and the rose window, for the bell tower, the central altar; and some interesting paintings. The attached austere monastery holds a picture named Volto Santo (Saint Face), a reproduction of the Veronica of the Christ, a very venerated icon to whom a feast is devoted. Of the ancient Church of Saint Mary of the Help, already existing in 1115, only the two back locals remain. The Church of the Mercy (Chiesa della Misericordia), territorial centre of the Knights of Malta, dated 16th century has an interesting façade with a very special portal and a Tympanon. The Church of Sant’Antonio Abate goes back to the first half of 1400, while that of the Annunziata, founded in 1475 by Roberto Orsini, has suffered various restructurings.

The most representative dishes are: homemade egg noodles, corn’s flour porridge (polenta), lamb and calf meat, the secular tradition of the workmanship of pork meat with sausages, ham, loin of pork, coppa, liver, salami, guanciale and bacon. The production of sweets follows the festivities: at Christmas pizza with walnuts and nivoles; at Carnival, pancakes and zeppole with honey chestnuts, and nocchietelle; at Easter, pizza and above all biscuits (little horses and doves) manufactured by the nuns of seclusion of the Benedictine monastery for the Feast of the Saint Face on Sunday in Albis. And also gnocchetti with chickpeas, celebrated with a festival in the beginning of August; the polenta with sausages and spuntature served in wood dishes, also celevrated with in the beginning of December; finally, the lamb with cheese and eggs is another delicious traditional dish.

What is “BORGO”. The literal translation of Borgo in English would be “Village”. But the term Village does not fully explain what a “Borgo” is. A “Borgo” is a fascinating small Italian town, generally fortified and dating back to the period from the Middle Ages to the Renaissance.
Category: Abruzzo29 December 2017