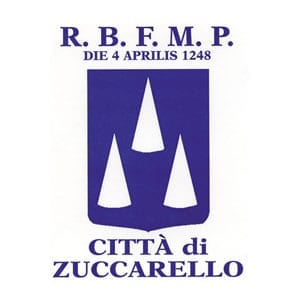 The name derives from Zucco or Zuccaro, meaning “hill” and “rounded hill”.

Zuccarello runs along a single road flanked, on both sides, by porticoes with different shaped arches and pillars. Parallel to its main street are the typical Ligurian alleys called carruggi.

Two towers rise on both sides of the entrance gates.

The Romanesque bridge has not lost the romantic charm that once enticed tourists to take photographs.

Worth seeing is also Porta di Ponte Neva, next to the bridge, Porta del Molino and the elegant the Marquis Palace, which preserves a remarkable cycle of frescoes and where Giovanni di Calabria, the representative of the King of France and Genoa, and the Marquis Del Carretto signed an armistice between Genoa and the Del Carretto di Finale family in 1459.

The parish church is dedicated to San Bartolomeo and preserves a Vergine e Santi (“Virgin and Saints”) by Orazio De Ferrari, a wooden statue of the patron saint by Paolo Olivari, the Romanesque bell tower and, in the Oratory which is dedicated to Santa Maria Nascente, a fifteenth-century wooden Christ.

Of great interest are also the beudi, long canals that were used to power the mills and olive presses and to carry water to the borgo. Evidence of the less noble aspects of the past can be seen in the Scalino del Buon Arrivo, where prisoners that were sentenced to death could obtain a pardon from the Marquis, and the black slate column where the condemned were tied and whipped.

Just outside the borgo, you can appreciate the late medieval frescoes of the Chapel of Sant’Antonio and the Church of Madonna della Neve near the cemetery.

The visit to Zuccarello continues along Via del Roso, which was the name of a fifteenth century farm belonging to the Del Carretto family,  the road goes from the borgo to Castelvecchio. It is about three kilometres long and takes about an hour and 15 minutes by foot. Today the trail, which rises gently, has been re-evaluated and dedicated to Ilaria Del Carretto. You will admire the care with which this road was built, the quarry stone cobbled paving was artfully arranged in order to prevent water stagnation.

Carrying on you will get to what remains of the castle, dating back between 1200 and 1248. The side turret, the best preserved element, contains traces of  some fifteenth-century frescoes.

The typical product of Zuccarello is a cake called “le rocche di Zuccarello”.

What is “BORGO”. The literal translation of Borgo in English would be “Village”. But the term Village does not fully explains what a “Borgo” is. A “Borgo” is a fascinating small Italian town, generally fortified and dating back to the period from the Middle Ages to the Renaissance.
Category: Liguria26 February 2018