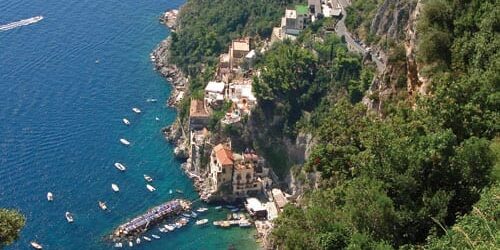 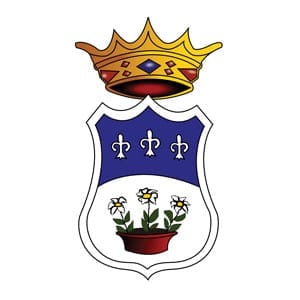 The name derives from the morphology of the place, nestled in a bay with a basin shape, and from the sea, because here everything speaks of navigation, sails that swell to the wind, ships in the storm, shipwreck and salvation.

Conca dei Marini is a seaside town nestled in a bend of the Tyrrhenian Sea, in a blaze of lights and colors. Conca is divided in two: down low, the small flushes of water which reflected in a small bay; on top, rested on the hill, white painted houses, scattered among the orchards, olive groves and terraces of lemon that descend to the sea. All the places of the borgo are connected by Scalinatelle which make their way to our steps between the scents of aromatic herbs. There are six churches to see, all in a panoramic position. One is the church of San Pancrazio, since 1362. Olive trees all around and palm trees in the churchyard, wrapped in a Mexican light. Overlooking the sea there is the thirteenth century church of Sant’Antonio (actually dedicated to Saint John the Baptist) with a façade and a bell tower with a spire covered by majolica tiles. The former convent of Santa Rosa with the adjacent church of Santa Maria in Grado becomes increasingly more visible as you proceed toward Amalfi. It was erected on top of a sheer cliff overlooking the sea in 1681 for the will of sister Rosa Pandolfi, belonging to a rich local family. In the kitchens of the convent, the sfogliatella  “Santa Rosa”, one of the most renowned sweets of the Neapolitan tradition, was created. After the death of the last nun in 1912, the convent was converted into a hotel. In the church of Santa Maria di Grado the head of St. Barnabas is kept, being one of the most important relics in the city province. The other three places of worship are the church of San Michele Arcangelo in via San Michele, the chapel of the Immaculate Elm and the chapel of the Madonna della Neve at the marina. The visit to the emerald grotto is a must: a marine cave hidden in a fold of the coast, whose waters, engraved from a blade of light coming from an underground hole, get emerald reflections in a stunning landscape of the stalagmites and stalactites. Finally, the ancient watch tower of Capo di Conca.

“Piennolo” tomatoes are hung in a dry place and shaded for a better conservation. Sauces and soups of fish cannot do without them.

The sfogliatella Santa Rosa is the greatest gift of the nuns of Conca dei Marini. The pleasures of the table are as a commandment that we must obey and that includes the pennette al pomodoro “piennolo”, spaghetti with Red Shrimp tomato sauce, scoglio fish soup of, rabbit lemon leaf, parmesan eggplant and courgettes, “passolini” (berries of raisins, lemon leaves tied with wire rushes).

What is “BORGO”. The literal translation of Borgo in English would be “Village”. But the term Village does not fully explain what a “Borgo” is. A “Borgo” is a fascinating small Italian town, generally fortified and dating back to the period from the Middle Ages to the Renaissance.
Category: Campania22 February 2021