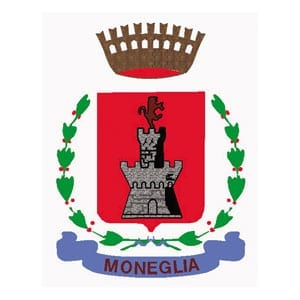 The name come from the Latin ”monilia”, meaning “precious jewels” and referring to the abundance of vegetation and fruit trees of the area.

In the past, the Borgo was divided in two parts by a stream, later covered; each of the two neighborhood had its own church and its cemetery.

San Giorgio,  in the western side of the Borgo, was founded by the Benedictine monks in the XIV century. Here you can admire a Franciscan cloister of the 15th century, two remarkable Gothic polyptychs and a magnificent canvas by Luca Cambiaso, an European master of the 16th Century. The elegant polychrome marble altar dates back to 17th Century.

Immediately after the square you’ll find the 18th century church of Santa Croce, whose courtyard is decorated with pebble mosaics, as per the Ligurian tradition. Inside, there are important wooden sculptures, a Byzantine crucifix and beautiful marble elements.

On the same square you can admire the house of  Felice Romani (a melodramatic poet), as well as the oldest building in Moneglia: the oratory of Disciplinanti. It was probably built during the 10th century and it is internally decorated with frescoes, recently restored, from the 12th to the 18th century.

Around the castle of Villafranca, you can find a beautiful botanical garden with Mediterranean plants and flowers.

An excellent extra virgin olive oil is produced here, as well as an excellent white wine perfect to be tasted with the traditional dishes such as trenette al pesto (pasta with pesto sauce).

What is “BORGO”. The literal translation of Borgo in English would be “Village”. But the term Village does not fully explain what a “Borgo” is. A “Borgo” is a fascinating small Italian town, generally fortified and dating back to the period from the Middle Ages to the Renaissance.
Category: Liguria5 December 2017